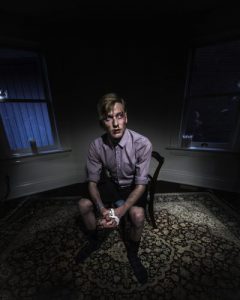 Let’s pretend for a second that we’re OK. What does that feel like? A lot of things are not OK with Thomas but he’s got a ten-pound sledge hammer and is pretty sure that could solve at least one of his problems. This is a show that he wrote. It’s for/from those times when you can’t get out of bed. When you’ve only been eating breakfast cereal for days. When if someone asks you how you are you’ll say great – and then smash your face into their face. Thomas has 4 ½ totally useful pieces of advice for battling depression. He has an hour-long anarchic expression of depression that must be passed through first. Because we are walking around polishing silverware or running schools or arresting jaywalkers, and we’re dying all the time and no one is saying anything. We aren’t talking because we don’t have words. Or we have those words but to say them could be worse. If he howls will you howl back? If we howl together will we be healed? (summerworks.ca)