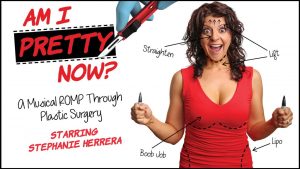 The first ever musical on plastic surgery and the trials and tribulations of going under the knife! Comedian Stephanie Herrera delves into a journey of insecurity and “never quite fitting in”. We get a first hand account, from “Ugly Duckling” to “MILF” and why she pays homage in her song “Thank you Colin Mochrie for my boobs”. Whether you are curious about plastic surgery or you just can’t fathom why anyone would do such a thing, this show will keep you laughing and tapping your feet as Stephanie examines race, gender, motherhood, and Liza Minnelli in 60 min. (Toronto Fringe Festival program)