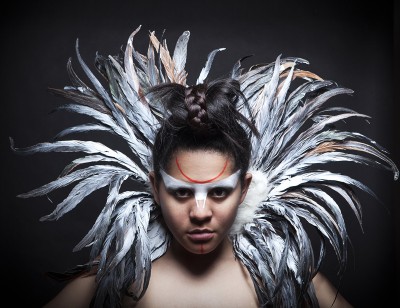 Featuring an all-star team of internationally acclaimed performers and artists, Ayelen brings together the world of theatre and visual art to create a love story on stage, where spirits, animals, dreams and magic unite to tell a mythological story of sufferance and peace.

This story takes place in an unnamed land, any land, governed by corruption and absolute power. Where genocide has dictated the survival of a select few, the only means to remain alive is complicity with violence, from which no one is safe. Here an eagle spirit named Ayelen must enter the depths of a mining cave to rescue her great love, and in doing so she must face the violence and power entrenched within these dark tunnels. Her perseverance will lead her to a den of iniquity where a desolate wasteland of lost souls will attempt to steal her essence, her truth and her life. In the confusion of love and betrayal, her assassination is ordered, and it is in this darkness that she is born again. Ayelen’s relentless perse- verance will transform the mining caves forevermore. In a world of magical realism, where animals and spirits breathe this story into life, Ayelen’s journey echoes a familiar struggle seen in places around the world where mining exploitation exists. (summerworks.ca)