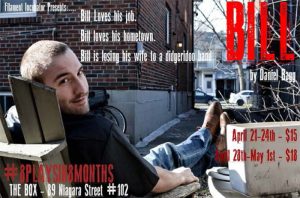 Bill is a one man show following the marriage of Bill and Suzan who are both in the midst of mid-life crises taking them in drastically different directions. Will Bill be able to support his wife in her new endeavours? Will he finally discover the true meaning of home? Will he finally be able to listen to the damn didgeridoo? (wherevent.com)