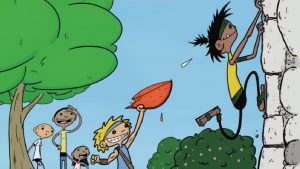 A great dividing wall… a rejected garden… a powerful king who says there is not enough… and a girl who can see beauty where the others can’t. Come think about community-building through story, music, and rhyme. They change you, you change them, that changes everything.

Blink’s Garden began as a short parable, told in schools by community educator John Janzen, as part of his work at a homelessness NGO in Winnipeg. It grew into a 77 stanza “epic kid’s poem” that was adapted into a stage musical and performed at the Winnipeg and Edmonton Fringe Festivals. (Toronto Fringe Festival program)