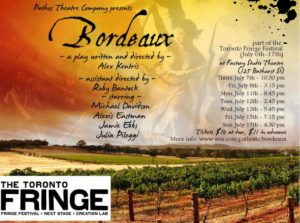 In late nineteenth century France, Pascal escapes war and revolution in Paris to settle in the small wine growing town of Bordeaux. In an attempt to begin life anew, he befriends an eccentric young woman named Genevieve, and her elder sister, Odette. The arrival of his ex-lover, Henri, with news from Paris, breaks the spell of his quiet existence and Pascal is forced to reconcile the pieces of his new life: the elder sister he has fallen in love with, the younger sister he has inspired and the young man who hurt him. He is forced to choose between the life of simplicity he has created in Bordeaux, and the life of grandeur that be abandoned in Paris. (Show Press Release)