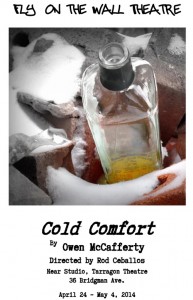 Fly on the Wall Theatre

Cold Comfort tells the story of Kevin Toner, a bricklayer living in a self-imposed exile in England, who returns to Belfast after a 15 year absence.  He has a bone to pick, and he is determined to have a conversation with his father that will leave no stone unturned.  In fact, this is going to be the first meaningful conversation they will have ever had together.

There’s only one problem. His father is dead.
And lying in a coffin in the front room.

A Room.  A Dead body.  Nowhere to Hide. (flyonthewalltheatre.ca)