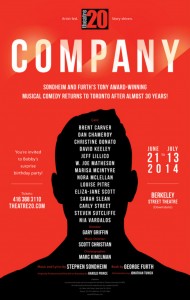 Company centres on Robert, a single man unable to commit to a steady relationship, the married couples who are his best friends, and his three on-again off-again girlfriends.

Set in upper-middle-class Manhattan and told through a series of vignettes in no particular chronological order, each character and scene is linked by the celebration of Bobby’s 35th birthday.

An honest, witty, sophisticated look at relationships, Company is as contemporary and relevant as ever. It features a brilliant, energetic score containing many of Sondheim’s best-known songs including “Another Hundred People,” “The Ladies Who Lunch” and “Being Alive”. (www.theatre20.com)