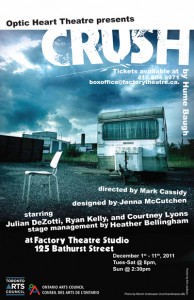 Crush is a story of desire, denial and violence. When Martin moves into Ronny’s and Sandra’s trailer park on the edge of the city, he captivates them both. Their longing for love and need to escape collide with fear and homophobia as the play accelerates toward its startling conclusion. Loosely based on the true story of the Jenny Jones Show “Secret Admirer” murder. (torontoartsonline.org)