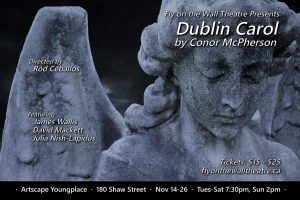 Fly on the Wall Theatre

Dublin undertaker, John Plunkett, is a man haunted by his past – a past he would sooner forget. It’s the morning of Christmas Eve and he’s back in his office with his new assistant, after overseeing an early morning funeral. Then an unexpected visit from his estranged daughter throws his daily routine into turmoil. It’s a visit that forces him to confront the ghosts of his past, but one that offers him a final opportunity to make things right. (flyonthewalltheatre.ca)