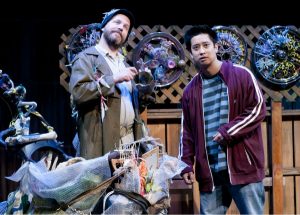 The play Edward the “Crazy Man” delivers a powerful and hopeful message about the power of friendship to build bridges between people. It explores the story of a twelve‐year old boy named Charlie, and his friendship with a homeless man with schizophrenia by the name of Edward – referred to by people around him as the “crazy man”. The very fact that this play is called Edward the “Crazy Man” immediately plunges us into the world of stigma, where a person with mental health problems has been labeled. In getting to know the “crazy man”, Charlie learns that Edward is a real person – not a label, a stereotype, a social outcast – but a person with feelings, a name, a story, past successes, creativity and imagination, and the ability to care. (workmanarts.com)