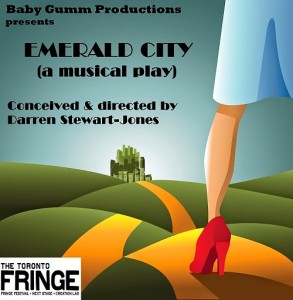 Based on characters created by L. Frank Baum

Emerald City is a musical play based on characters from The Wonderful Wizard of Oz books and featuring music from the American Songbook of the early 20th century. Follow Dorothy and her friends as they take a detour off the yellow brick road and find themselves in group therapy with Dr. Oz, Psychiatrist, figuring out their problems one step at a time. (Toronto Fringe Program, 2014).