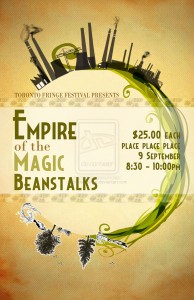 Empire of the Magic Beanstalks (2012)

The Little Mermaid and Rapunzel join forces in an epic and hilarious tale to bring down the corrupt Empire of the Magic Beanstalks, controlled by Jack and his mother, before its pollution destroys the world for good.
This show is full of energy and excitement, with a healthy dose of sarcastic wit and is great fun for audiences of all ages! (fringetoronto.com)