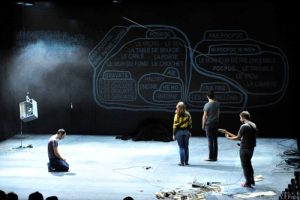 Straddling the playful and the profound, Germinal begins with a bare stage and a group of intrepid adventurers who set out on a mission of exploration. Their task: to imagine how they would remake the universe from the beginning. Throughout the show, their 8×10-metre world becomes increasingly complex as they construct and deconstruct the history of speech, technology, politics, art — nearly all forms of social structure. (harbourfrontcentre.com)