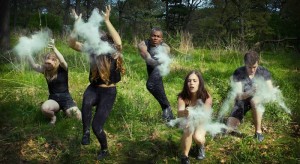 Sound you’ve never heard. Pressure you’ve never felt. Action you’ve never taken. It’s the revolution you’re about to start. Witness 8 people grab on to their percolating insides, hang them up to look at, and make a choice: move towards the unfamiliar, or sit comfortably for another lifetime. On your mark, get set, GO! (Toronto Fringe Program, 2014).