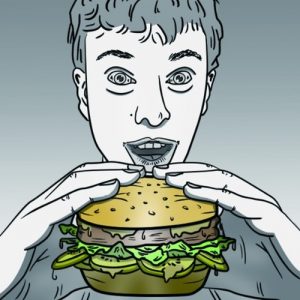 Hamburger is a comedy about sexual politics in the workplace. A couple, 12 years apart in age, wrestles with the economic immobility of their generation. While Arie finds passion in his impressive ability to sell hamburgers at pace, Lib struggles through her academic shortcomings and vegetarianism in hope of better future employment. Work is a place that neither character can reasonably leave—they are forced to bear each other’s presence until the day is done. And, while at work, Lib and Arie have no ladder to climb but each other. (fringetoronto.com)