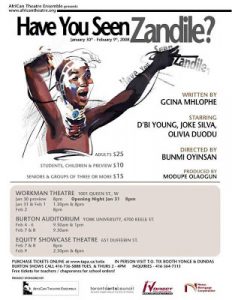 Zandile is an eight-year old being raised in a city by her grandmother who gives the child the great gift of stories and the magic to transmit them.  In return, the child gives the grandmother a purpose. It is not long before Zandile “finds” a girl her own age. The girl, Bongi, is a creation of Zandile’s imaginative mind. When not playing with Bongi, Zandile transforms her grandmother’s flower bed into a music class, determined to teach the sunflower, the violet and the marigold  to sing. Into this idyllic childhood a white car intrudes; it has come to take Zandile away. The kidnapped girl is forced into a new routine of rules calculated to turn her into a “traditional and proper” woman. Back in the city, Zandile’s grandmother looks in vain for the kidnapped child. Time passes. Zandile grows and her consciousness develops. As soon as she is independent, she goes in search of her grandmother. But is she too late? (africantheatre.org)