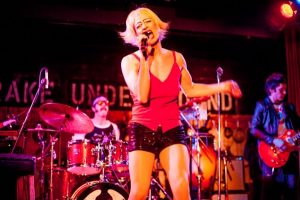 Hedwig and the Angry Inch is a rock concert style musical that tells the story of transsexual bombshell Hedwig and her nonchalant indie band ‘The Angry Inch’. The play centers around their tour across America in pursuit of Hedwig’s former lover and world-famous pop star, Tommy Gnosis. Featuring an array of biographical interludes and eclectic music inspired by pop/rock icons of the 70s and 80s including David Bowie, Iggy Pop, Toni Tennille and Debbie Boone, this gender-bending production takes the audience through a tragic story of betrayal, emotional and physical sacrifice, and love. (broadwayworld.com)