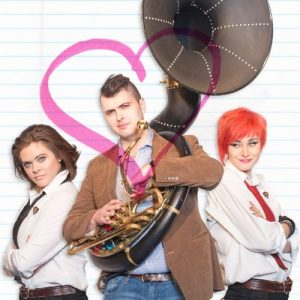 An eight-piece, Big Band “Mean Girls”. A remarkable friendship between two grade school girls is tested when they face suspension for sexual harassment toward their teacher. The drama unfolds with a cast that consists of an immersive marching band who double as hot teachers, note-passing BFFs, and of course, the enemy popular group. Ignoring the guy who always plays “Wonderwall”, the soundtrack is decked with video game references, anime theme songs, and slicked-up sounds from the early 00’s that got every millennial through their pimply prepubescence! (fringetoronto.com)