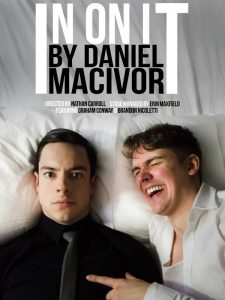 An intricate story about a dying man trying to make plans for the end, a pair of lovers trying to make it work, and two men trying to write a play. The world of In On It takes place in three distinct realities that intersect and intertwine with each other, with each storyline revealing new details about the one event that shaped and connected each of the storylines. In On It is a quest to find meaning in a world that often seems meaningless. (Show Facebook Event)