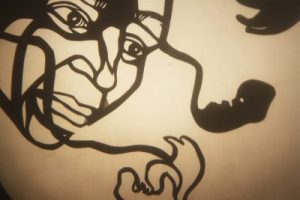 IN UTERO OUT is a shadow puppetry show exploring a spectrum of intergenerational tales of embodiment. Become immersed in the imagery and microcosms presented – large-scale shadow projections and soundscapes tell a spectrum of intergenerational tales of embodiment. Reflections on so-called “uterine sagas”: The birth experience of a grandmother nearing 100 years old; An unrecognized pregnancy’s sudden ending; An expectant parent who is faced with assumptions and surprise outcomes. This work is inspired by issues of reproductive justice and multiplicity of experiences bodies can hold. (summerworks.ca)