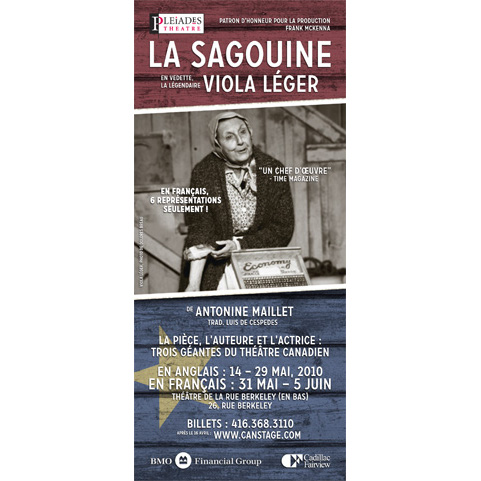 Maillet’s La Sagouine, originally written in the French Acadian dialect, is a collection of sixteen monologues spoken by dirt poor, uneducated Acadian woman who has never left her village of Bouctouche, New Brunswick.  La Sagouine (a derogatory term meaning “the filthy woman” because of her job) and her husband Gapi, a oyster fisherman, eke out a living at the very bottom of the social hierarchy.  Though part of the community of Acadians, they are still viewed as outsiders in very land where they were born and thus can view the world with the detachment and humour that are perhaps the only solace an outsider has.  As we learn from La Sagouine, Gapi’s world view is cynical, irreligious and iconoclastic.  She refuses to listen to his tirades because her natural inclination is to see what little good there is in things no matter how bad they seem.  Of the twelve children she bore nine died in infancy, but three did survive.  Always, she tries to figure out why God would have willed such a thing even when there seems to be no answer.  It is not death she fears but what might come after.  If it is hell, she need not worry because she is already familiar enough with it on earth.  Of the sixteen monologues, Léger performs five–“Death,” “The Pews,” “The Census,” “The War” and “The Spring.”  (stage-door.com)