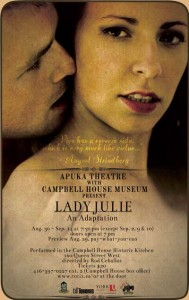 LADY JULIE (an Apuka Theatre original adaptation of August Strindberg’s Miss Julie) is the story of a young woman of noble birth who, left at home for Midsummer’s Eve, spends the night cavorting with her servants – in particular a charismatic valet named Jean.  What follows is a sexually charged, taboo ridden exploration of the restrictions placed on people by birth, class and gender.  By setting LADY JULIE in Campbell House Museum’s historic kitchen, Apuka Theatre hopes to fully realize Strindberg’s naturalistic vision for the play by eliminating the fourth wall and inviting the audience to merge with the same milieu as the actors. (apukatheatre.com)