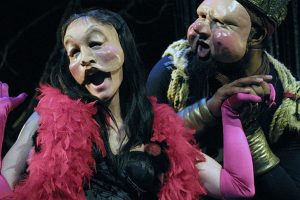 Shakespeare in Action and Workman Arts

Inspired by a series of Shakespeare workshops he had done with Workman Arts members, those who have received mental health services, director Michael Kelly has used his experiences to make connections between the worlds of theatre and mental illness. He found that the participants’ insights on the language and poetic imagery ranged from insightful, unusual and remarkable, to chaotically disordered. Kelly observed that their heightened sensitivity was mirrored in the world of Shakespeare’s Macbeth – a heightened world in crisis, where disorder and chaos gives way to fear and eventually madness. The world that Shakespeare so masterfully creates in Macbeth is not unlike the realities of many mental health consumers, whose worlds are very often in crisis. (artword.net)