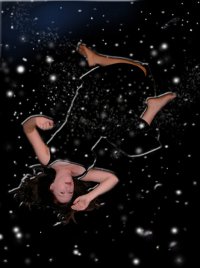 Sharon, a frustrated, alcoholic housewife, once again packs up the family’s belongings to follow her husband to another promotion. John and the kids have gone ahead, leaving her behind to take care of the move. History is in the making and they have the TV in the car.

Sharon ‘s turmoil plays out like a Judy Garland-esque TV Variety Show. But her very real depression cannot be cured by ordinary means; it careens, angry and out-of-control, into fantasy, pop culture and Japanese anime as she searches for survival. (nextstagefestival.com)