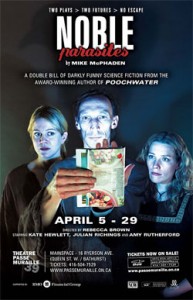 Act I, The Bookworm, is set hundreds of years in the future and follows an underground society on the edge of extinction; Act II, Sea Change, takes place only a few decades from now in an ultra-modern world of espionage and betrayal. The Bookworm: Deep below the earth’s toxic surface, humanity clings to life in a cult-like society. When young Lindy discovers a forbidden artifact (a 20th century magazine depicting a long-forgotten past) her world is thrown into chaos. To make matters worse, it’s Lindy’s Examination Day, and she’s about to face the city’s most menacing elder. Sea Change: In the wake of an environmental catastrophe, Thomas spies a golden opportunity. Armed with the hyper-tech secret to winning the upcoming election, he meets with a shady government operative in a city park. But Thomas’ plans are upset when the transaction goes crazily awry. (theatremania.com)