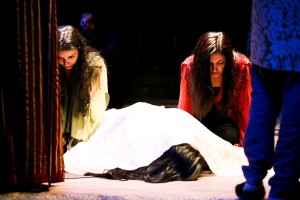 A startling new theatrical version of an Arabic classic. In Luminato’s most ambitious commission to date, British director Tim Supple  unites with acclaimed Lebanese novelist Hanan al-Shaykh to unearth the true character of the One Thousand and One Nights. Written in Arabic from tales gathered in India, Persia, across the great Arab Empire, the One Thousand and One Nights are the mesmerizing stories told by Shahrazad night after night, under sentence of death, to the king Shahrayar who has vowed to marry a virgin every night and kill her in the morning. Erotic, brutal, witty, and poetic, the tales tell of the real and supernatural, love and marriage, power and punishment, rich and poor, and the endless trials and uncertainties of fate. (luminatofestival.com)