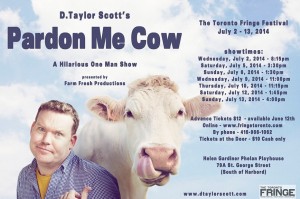 Growing up on a farm is never easy… especially when you’re gay. Luckily, writer/comedian D. Taylor Scott had one true friend – a cow! In this hilarious fast-paced one-man show, Taylor Scott reflects back on his crazy relatives and disdain for farm living while recognizing it (and the cow) shaped how he now interacts with people, technology and the world. (Toronto Fringe Program, 2014).