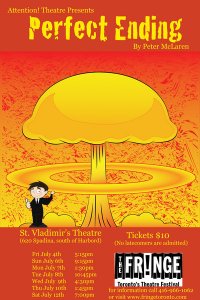 How much do you like the planet you’re living on? Well, don’t get too attached because, soon enough, it’s going to be gone, gone, gone! That’s right! Even if we beat global warming, we’ve got comets on the way, Christian prophecies, Mayan calendar dates and a myriad of other colourful possibilities for why humans may go kaput at any moment. It’s a party! Come out and celebrate with Peter McLaren’s Perfect Ending, a lighthearted look at why the world will most definitely end soon and why that is hilarious. (fringetoronto.com)