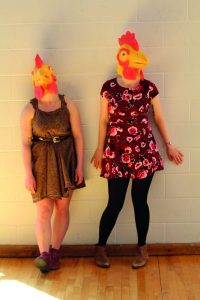 Infusing comedy, bluegrass music, and a complete lack of sentimentality, Plucked is set in a world where fear turns women into chickens, eggs are high currency, and vaginas are near-dangerous possessions. Plucked skewers patriarchy without holding punches. It exposes hard truths about fear and family. It’s funny because it’s fake; it’s vulnerable, but it’s okay because it ends with a curtain call, but it’s not okay because it’s familiar. Plucked is, after all, a true story. It’s just full of lies. (summerworks.ca)