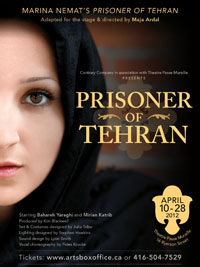 Adapted from the bestselling memoir by Marina Nemat

In 1980, when she was only 16 years old, Marina Nemat was arrested for speaking out against Ayatollah Khomeini’s regime.  She was imprisoned in the infamous Evin Prison, tortured, and sentenced to death. At the last minute her execution was halted by her interrogator, who then forced her into marriage. She continued to be a prisoner. For over 20 years Marina Nemat never spoke of her experiences, until she was living in Canada and could no longer stay silent about what she had survived. An extraordinary tale of faith and survival, Prisoner of Tehran is a testament to the power of love in the face of evil and injustice. (passemuraille.on.ca)