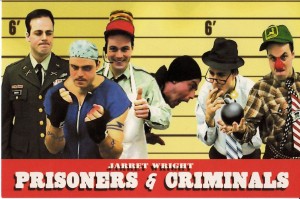 An exciting and visceral solo performance that explores the psychology and circumstance of 6 real life  “Prisoners” & “Criminals”, ranging from an obsessive-compulsive animal lover to a mafia hit-man whose childhood trauma still haunts him to a veteran of WWII making his last will to a mentally deficient child
unable to comprehend his violent actions to name a few. (Show Press Release, 2014).