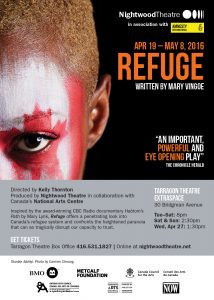 Inspired by the award-winning CBC Radio documentary Habtom’s Path by Mary Lynk, Refuge offers a penetrating look into Canada’s refugee system and confronts the heightened paranoia that can so tragically disrupt our capacity to trust.

East African army deserter Ayinom Zerisenai has landed in Nova Scotia, where his mother already has refugee status. But even as his plight wins the support of immigration lawyer Saul Ackman, questions about his past actions – and his current enigmatic behaviour – begin to haunt Pamela who has taken him under her roof. Are she and her husband harbouring a legitimate refugee – or a terrorist? A harrowing story of the pitfalls of seeking sanctuary in today’s suspicious world. (nightwoodtheatre.net)