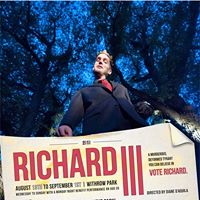 A murderous, deformed tyrant you can believe in. Vote Richard. The wars that gripped the country have ended and an uneasy peace has settled on the land. Richard, a once-glorified war hero and king-maker of his brother Edward IV, has been pushed to the side in this time of peace, and his physical deformities, once striking fear into the hearts of his enemies, now elicit scorn and laughter. Richard soon makes a game of clawing his way to the throne, honing his skills for backroom deals and political maneuvering. As the saying goes – it’s all fun and games until someone loses a head. Ambition, political intrigue, and Shakespeare’s most devilishly charming hunchback in one thrilling adventure. (shakespeareintheruff.com)