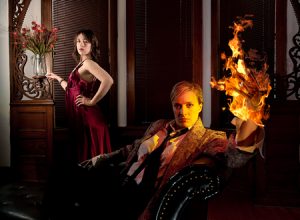 In 1930s New York, at the height of her career, the English-born Queen of the American stage, Eva LeGallienne, is outed in the press as a lesbian. She escapes to a country retreat with her lover, Josephine Hutchison, only to be disfigured and nearly killed in a terrible explosion. The story slips back and forth in time as Eva struggles with art, disfigurement, alcoholism, sexuality, and acceptance. She battles with Broadway, critics, and her personal demons, while tormented by the overwhelming question: If her public and private battles destroy her happiness but nourish her art, will it have been worth it? (broadwayworld.com)