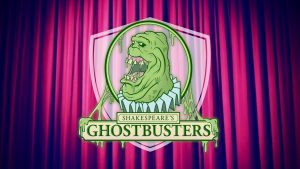 Created by the company

Whom Wilt Thou Call? Imagine if the original Ghostbusters movie had been written by the bard. Well you don’t have to imagine it because this is Shakespeare’s version brought to life. A staged reading featuring Lords Venkman, Stantz and Spengler and a cast of spirits worthy of the poet of Avon. The streams of 80’s nostalgia and Shakespearean text cross with hilarious results… ..
Pray I beseech thee, audience fair
To hear this tale of actions rare
If spirits be the problem that troubles thee most,
Whom wilt thou call? The busters of ghosts. (Toronto Fringe Festival program)