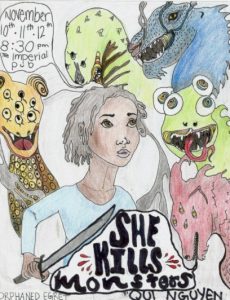 “She Kills Monsters” is a tale full of humour, grief, sisterhood, and a heaping dose of high fantasy. Agnes Evans moves out of her childhood home following the death of her teenage sister Tilly. Among her sister’s effects Agnes discovers a Dungeons and Dragons module that leads her on an epic voyage of self-discovery. Elves, Demons and 90’s pop culture references abound in this spellbinding homage to early geekdom and the secret adventurer within us all. (orphanedegret.com/)