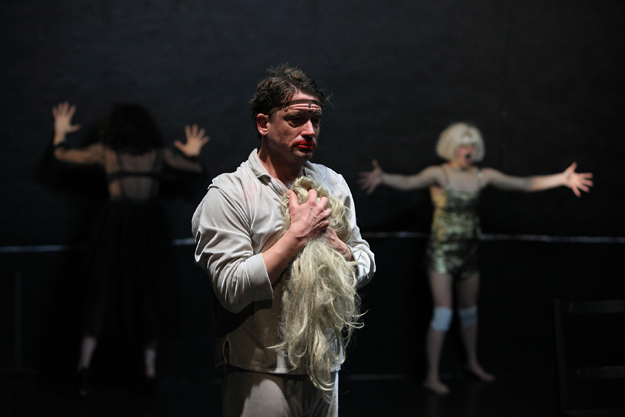 Three figures – witnessed and witnessing – are bound, blurred and melded together to reveal a portrait of a dismantled family, its pigments violently peeled away and reapplied. Toronto choreographer Susanna Hood dreams the canvases of Francis Bacon to life. Shudder forges, with three performers, a work of missed connections that evokes sensuality, brutality and loneliness. Theirs is a grotesquely beautiful and disarmingly intimate encounter.Shudder promises to be ground-breaking in the field of Canadian dance in the way that it rides a vibrant and volatile line between narrative and abstraction. Hood digs deeply into the emotional and kinetically textural world beneath the surface of movement, much like the violent underworld brought to light in Bacon’s canvasses. Three twisted shaped casts an unsettling impression of a family in decay, sliding in and out of one another, devouring and devoured. It is Hood’s most impressive and gripping work, an experience not to me missed – particularly for fans of Francis Bacon. (Show Facebook Event).