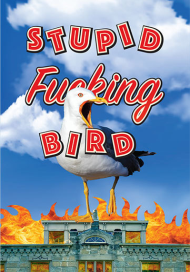 Sort of adapted from the Seagull by Anton Chekhov

An irreverent update, a completely fresh and inspired version of Chekhov’s masterpiece looking at unrequited love and emotional misery in a entirely hilarious new way. A comedy for those who think and a tragedy for those who feel.

It is wickedly funny, heart-breaking, truthful, angst-ridden, meta-theatrical, multi-generational, and a perfect ensemble piece. Its not just a new translation or adaptation of a period piece but a sharply drawn contemporary investigation of those iconic characters, their needs and wants and realities. Rather than being a classic of the Moscow Art Theatre, it belongs to our North American present; it reflects our now. (sfbird.com)