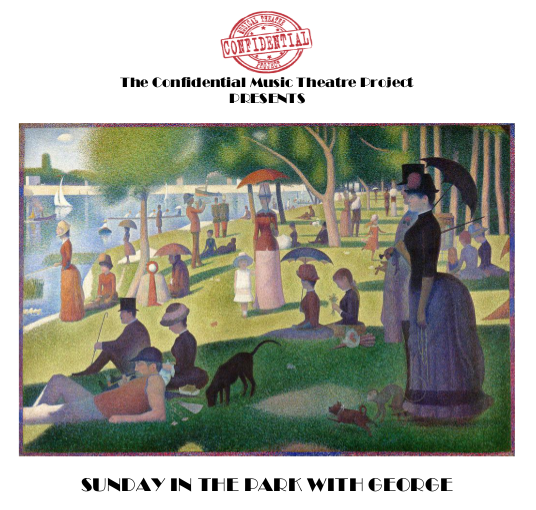 We choose a show that doesn’t get done very often, but should. We cast the show with the best performers possible regardless of age, race, body type or gender. We get them their scripts and scores and ask them to familiarize themselves with their part(s). With NO rehearsals, we all meet for the first time on the night of the performance and start the show. The challenge for the performers: create an ensemble on their feet in front of an audience. The only rule: We don’t stop – no matter what happens. It’s fly by the seat of our pants, theatre, and it’s going to be fun. The audience shows up without knowing what show they’re going to see, but knowing that it could be a train wreck…but we hope not. (confidentialmusicaltheatreproject.com)

Sunday in the Park with George is a musical with music and lyrics by Stephen Sondheim and book by James Lapine. The musical was inspired by the painting “A Sunday Afternoon on the Island of La Grande Jatte” by Georges Seurat. A complex work revolving around a fictionalized Seurat immersed in single-minded concentration while painting his masterpiece and the people in that picture, the Broadway production opened in 1984. (Show Wikipedia Entry)