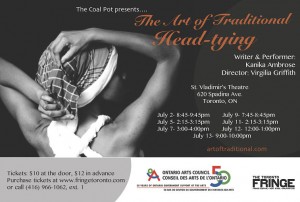 The Art of Traditional Head-Tying (2014)

What and where is home? “If the values, people, and traditions of the place I call home have changed, where is my home now?” 20 years after immigrating to Canada, Rosemarie Jon-Charles Hicks is going back to her home island, Dominica, to teach a series of head-tie workshops. While there, the people she encounters will have her facing just this question. (Toronto Fringe Program, 2014.)