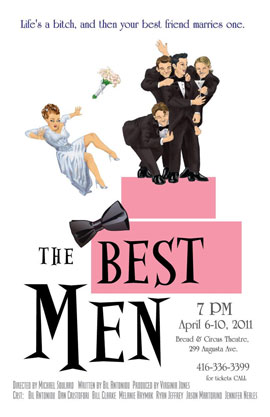 The play features a cast of seven and revolves around the wedding day of hopeless romantic Sam, his difficult-to-love bride Sherry, and the three gay blades who make up the wedding party: it would be a great time if any of them liked the bride.

Groomsmen Max and Parker are happy to sit back and watch disaster strike, but Leo has even more on his plate to deal with: his new girlfriend has shown up as his Plus One, and his boyfriend still doesn’t know that they’ve broken up. (mygaytoronto.com)