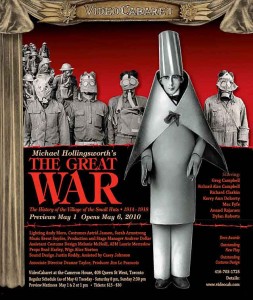 The play begins in the spring of 1914 in Canada. Young men are reading Kipling or flirting with their best friend’s gal, others are raising chickens or killing raccoons. Though many cultures are struggling to maintain or establish their voices in the national dialogue, British Canada is a well-fed young bulldog with a loud bark, large bite, and the absolute run of the place.

At Rideau Hall, Queen Victoria’s son, Duke of Connaught, presides with his Prussian Duchess. The Duke is the uncle of England’s King, Russia’s Czar and Germany’s Kaiser, whose loyal empires are engaged in a family quarrel soon to be known as “the war to end all war”. With Quebec dissenting, the loyal colony of Canada sends a tenth of its population to defend the British Empire.

The play follows Canadian officers and infantrymen through the battles of the Ypres Salient, Vimy Ridge, Passchendaele, the Somme, and Amiens, as the war devours ten million lives. The action features General Arthur Currie, and characters names in no history book: officers Stephen Ramsey, Robert Adams, and the heretofore unknown soldiers, Dave and John.

Through the action on the Western Front, the home front is glimpsed – Canadian soldiers storm machine-guns as conscription-resisters are shot in the streets of Quebec City. Under British Command, the Canadian forces suffer 230,000 casualties, 58,000 killed, altering the colonial gestalt forever. Pride and grief kindle a desire for an independent destiny… (videocab.com)