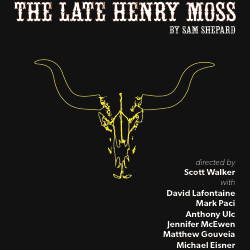 Henry Moss is dead. And no one knows what happened. As Earl and Ray Moss look back to their fathers past, building a story that fills in the gaps of his untimely death, it becomes apparent that memory can be a biased truth. What is true? What has been imagined? Touching on themes of family, alcoholism and, generational violence, The Late Henry Moss looks at how memory serves us and how we use it to serve the truths we need to survive. A surreal, dark comedy rooted in autobiographical references, Sam Shepard paints a world steeped in bourbon, stinking of decay and filled with mystery. (brownpapertickets.com)