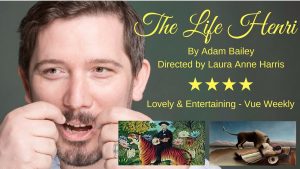 Visit Paris, the City of Lights, as it moves from the 19th Century into the 20th, with the whimsical and critically acclaimed Adam Bailey. WINNER Best of Fringe: The Assassination of Robert Ford, WINNER Patron’s Pick: Adam Bailey is On Fire.

Together, examine the life of Henri Rousseau and his contemporaries, Monet, Picasso and Dali in one of the zaniest, most improbable journeys to success the world has to offer. History’s greatest house party, the invention of modern plumbing and untold surprises await. (Fringe Festival Program)