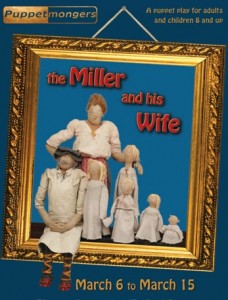 The Miller and His Wife is our adaptation of two classic folktales about power, bullying and trickery; about the “little guy” standing up to mistreatment by someone bigger, or wealthier, or just plain greedy.

The first tale is known around the world in various guises – Hans Christian Anderson called it “Big Klaus and Little Klaus”, an Irish version is called “Hudden and Dudden and Donnal O’Neary”, and variations are found in France, India, Korea and almost everywhere. The second tale is an Irish one about outwitting the “little folk”, who we replace with royalty and a palace.

And tying it all together is the puppet family of the Miller, his Wife, and their five children who collaborate to outwit a bullying neighbour and a power hungry civil servant. (puppetmongers.com)