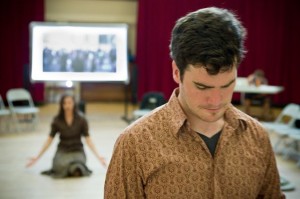 Daniel and Lindsey met working on the biggest project in FLIP’s history: a documentary film about the 2011 uprising in Egypt called The Omega Project, and how the people of Egypt worked together to create a flourishing democracy from the sectarian violence that had apparently existed until then. Their work propelled FLIP (the Foundation for Lasting International Peace) to the forefront of the NGO community and helped to create a world-wide movement for non-religious peace initiatives.

Four years later, they’re back. Meeting at a FLIP membership meeting for the first time in a while, they’re talking about the project and what it meant to them, to FLIP, and to the world. Refreshments provided. (glasswater.ca)