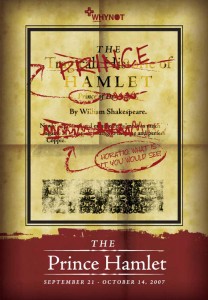 Not yet two months after the death of King Hamlet, the Queen has remarried and Prince Hamlet struggles to understand how the world and his mother are able to move on. Visited by the ghost of his father who directs Hamlet to avenge his murder by killing the murderer – his uncle, now king and step-father. The Prince Hamlet is the story of a young man/boy burdened by what he must do, trying to understand how to live in his time and how “to be”. (Show Press Release)