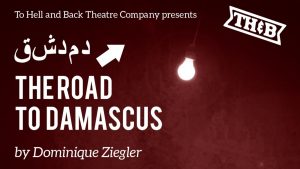 To Hell and Back Company

Two men in a police station in suburban France: a police officer and a young man suspected of wanting to join a terrorist group. One defends the many opportunities given by our society, the other represents a youth lost to disillusionment. Thus begins a tense interrogation, a game of chess, with each opponent trying to throw the other one off their tracks. Their visions of the Western world confront each other, clash … who will convert whom? (fringetoronto.com)