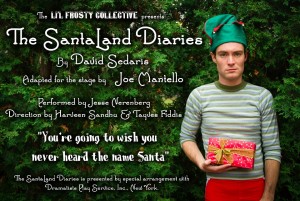 The Santaland Diaries follows David (Jesse Nerenberg), a slightly cynical newcomer to New York who is forced to forego his dream of writing soaps to work as one of Santa’s elves in Macy’s Herald Square, the largest store in the world. Over the weeks leading up to Christmas, David is witness to the side-splittingly sordid lows of seasonal work, but not without a brush with the heart-warming spirit of the holidays. (Show Facebook Event)